How A 27-Year-Old Built A 3 Billion USD Fortune.

Johnny Boufarhat was fed up. A rare allergic reaction in 2015 left him with a faulty immune system, making him crave in-person contact while staying indoors to prevent further health flare-ups.

That frustration led him in early 2019 to start writing code in his London apartment kitchen for an online events platform that became Hopin Ltd. This month, the startup raised $ 450 million from investors, including Altimeter Capital. Brad Gerstner’s Management, with a valuation of $ 7.8 billion. At that level, Boufarhat’s stake is now worth around $ 3.2 billion, making him one of the youngest billionaires in the world, according to the Bloomberg Billionaires Index.

A spokesperson for Hopin declined to comment on Boufarhat’s net worth.

Technology and the ease of raising venture capital have created a far greater number of new billionaires than ever before and at ever younger ages. Boufarhat’s fortune highlights Hopin’s strong growth in the aftermath of the pandemic, making him a big winner from the global shift to online meetings after governments ordered closures and told workers to stay in. home.

Hopin had six employees at the beginning of 2020 and now has more than 800. The firm accelerated its growth this year through acquisitions, including video technology firms StreamYard, Streamable, and Jamm. In June, the London-based firm announced the purchase of Boomset, a management platform for in-person and hybrid events, and the following month said it had acquired event marketing firm Attendify.

Boufarhat’s vision for Hopin was clear to his early backers.

He has “incredible passion” for his business, said Tom Wilson, a partner at London-based venture capital firm Seedcamp, who led Hopin’s 2019 pre-seed investment round.

“We were very quick to engage in the room, which is not something we do all the time,” Wilson said, recalling his and his colleagues’ response to the Boufarhat launch. “We all looked at each other and said, ‘Wow, this is pretty amazing.’

BoufarhatHopin’s CEO was born in Australia to parents from Lebanon and Armenia but moved as a teenager to the UK. He earned a bachelor’s degree in mechanical engineering and management from the University of Manchester, where he developed an app for students to find discounts.

In late 2019, the self-taught programmer released an initial version of Hopin, allowing users to attend breakout sessions during events and network with attendees through automated one-on-one video conferencing. Boufarhat initially planned to launch the event platform in September 2020, but the pandemic forced him to speed up the schedule by six months. 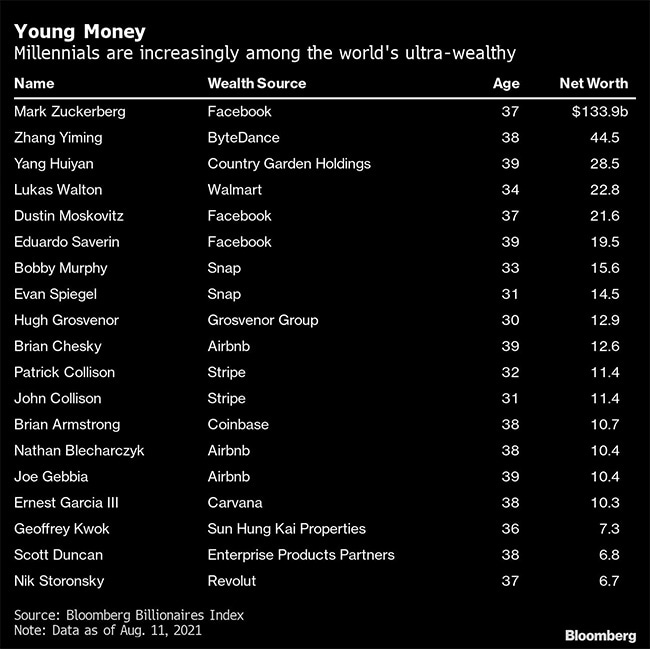 “Johnny had figured it out long before the pandemic,” said Par-Jorgen Parson, a general partner at London-based venture capital firm Northzone, a serial investor in Hopin’s fundraising rounds. “So all the arguments and the market solidly pointed to what I had already thought.”

Boufarhat is the last millennium to become a self-made billionaire as the rise of technology, finance and SPACs creates huge fortunes at a breakneck pace. The Collison brothers, Patrick, 32, and John, 31, are each worth $ 11.4 billion through online payments firm Stripe, according to the Bloomberg wealth index. Nikolay Storonsky, 37, founder of Revolut, has a stake worth about $ 6.7 billion, while Austin Russell, 26, who dropped out of Stanford University, became a billionaire last year after his Luminar Technologies Inc.’s driverless car business went public. There are now 19 people under the age of 40 among the 500 richest people in the world, according to the index.

Boufarhat, who lives in Spain, sold 130 million pounds ($ 180 million) worth of shares between July 2020 and March 2021, leaving him with a roughly 40% stake in Hopin, according to compiled data. by Bloomberg.

Although Hopin is registered in London, it does not have a central office. Boufarhat said in a blog post to mark the latest fundraising round that he seeks to keep a completely remote workforce. He is also betting that the world will never go back to the way it was before the pandemic.

“Our future will be one in which people can participate in the experiences that matter to them, wherever they are,” he said. “In other words, it is a future aligned with Hopin’s initial vision.”

(Except for the headline, this story has not been edited by NewsGater staff and is posted from a syndicated feed.)

~ She is a professional blogger, writer, speaker, and attached to a famous magazine in India. She loves to cover all types of Sports news in NewsGater.